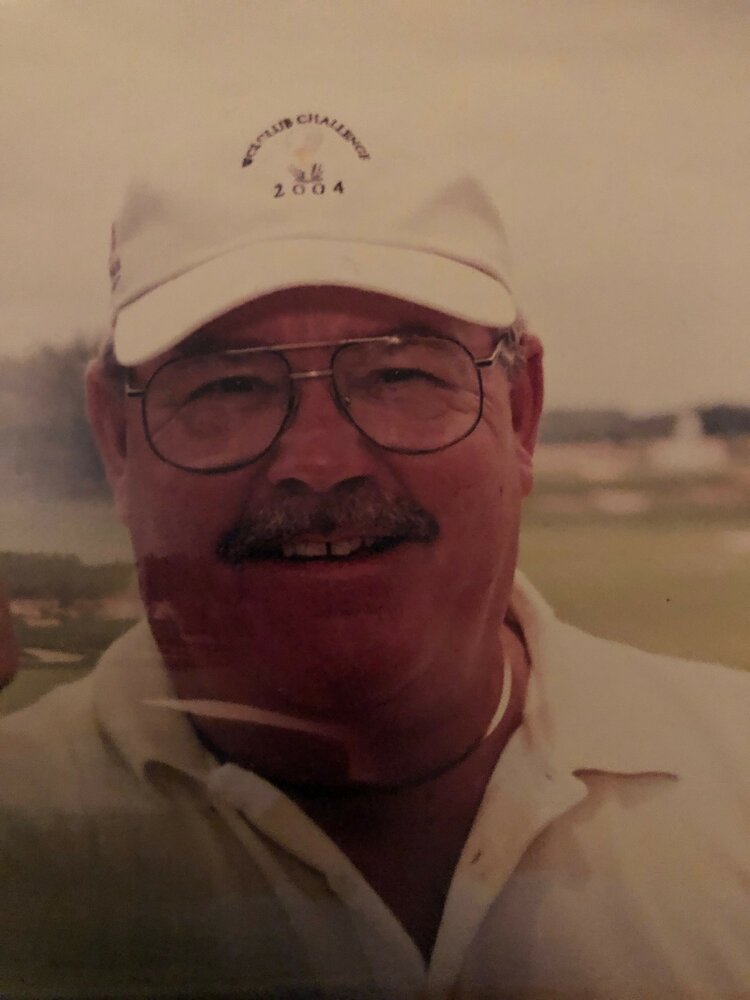 Jay Alan O'Connell went to be with the Lord, recognizing his match was dormie on October 20, 2022. God thankfully allowed us to play alongside Jay for many years, enjoying the many wonderful days on the golf course along with hours after each round in the 19th hole.

Jay was born to the late John Austin O'Connell and Mildred Jeanette Funnell on May 13, 1944, in Whitehall, MI. Being the son of depression-era parents who embodied frugality and moderation.... well, let's just say Jay didn't exactly follow in their footsteps. He was quite a consumer, as noted by the many golf clubs in his garage and his passion for living life to the fullest in consumption. This may have resulted from him being the middle child and suffering from, perhaps, the Middle-Child Syndrome. Jay was slightly rebellious, some would call a stinker, but he did focus on athletics to excel from that feeling of being second-best. He was elected to the Whitehall High School Hall of Fame primarily for his Golf accomplishments, notably winning the 1959 State of Michigan Golf Tournament, but also for many other sports, including football and skiing. He loved to sail winning numerous regattas and was the Junior Commodore of the White Lake Yacht Club in 1961.

He attended Western Michigan University but had a little too much fun his first year. He transferred to Grand Valley State University and started working at Howmet Aerospace, where he accepted an opportunity to move to Wichita Falls, TX. It did not take long for Jay to start making inroads into the local golf community of his new home. He became a regular on the “Bar-B-Que Circuit" of golf, although there was much more beer consumed than Bar-B-Que in those days. This paved the way for Jay to meet new people and continue his slightly rebellious ways. He won several tournaments thought-out the region taking his “Quickest Back Swing in the West” to new levels of success. He and his wife of 45 years, Kathleen O'Connell, enjoyed their time in Texas but were ready for a new chapter.

In 2000 he and Kathleen decided to move to Sun City Center, FL, to take advantage of the 12 months of good golfing weather. Again, it didn't take long for Jay to meet likeminded golf aficionados and settle into the Florida transplant way of life. Still swinging fast, Jay continued to rack-up his extensive collection of "Garage Clubs”. He took pride in his new home and was happy he was only a short golf cart ride away from the frequently visited 19th hole.

In all, Jay made 16 hole-in-ones during his lifetime, including the double "Grand Slam" on his childhood course in Michigan (making two hole-in-ones on every Par 3). Surprisingly, he accomplished all these feats without eating a single vegetable in 78 years.

But along the way, God gave Jay a couple of mulligans on his health.  He made the most of them by always welcoming a new friend into his life and frequently calling his children and grandchildren. He loved talking to them, sometimes offering unsolicited guidance, but they cherished every minute. He was a loving father and grandfather in that respect, and these calls will be greatly missed.

Jay was preceded in death by his parents John "Father John" and wife, Jannette "Shorty" O'Connell, his brother Terry O'Connell and his nephew Darin O'Connell. He left many loving memories and will be deeply missed by his wife, Kathleen O'Connell. Her sons Ron West (Terry) and Steve West, his sister, Nancy Tryon (Melvin), their children Justin (Becky), Jeremy (Jamie), and Julieann (Richard), nephew Dana O’Connell (Heather), his daughter Kimberly Christensen (Dan), grandchildren Mitchell (Samantha), his son, Kevin O'Connell (Wilma), grandchildren Luke (Brianna & great grandson Porter), AR, and Ali. The Family would like to express a special thank you to his cousin Bob Funnell (Robin) and to all the friends that have been so caring to the Family during this time.

After an extremely short deliberation, it was decided that it may be best to celebrate the life of Jay O'Connell the 19th Hole rather than a Church (more to come on this celebration). The Family hopes that all the friends' Jay made along the way will join them in helping to remember a truly classic, loving, and friendly one-of-a-kind human being.

To send flowers to the family or plant a tree in memory of Jay O'Connell, please visit Tribute Store

Share Your Memory of
Jay
Upload Your Memory View All Memories
Be the first to upload a memory!
Share A Memory
Send Flowers