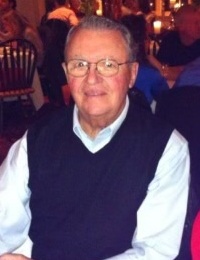 Richard Dixon Holgate, 83, the beloved husband to Ellen Marie (Price} Holgate of Sun City Center, Fl, passed away into the arms of our heavenly Father on October 20th, surrounded by his loving wife of 59 years, and 3 adoring daughters. Susan (wife of Donald Warfel Sr.} Marybeth Holgate, and Lisa Holgate. His 3 grandsons, Donald Warfel Jr. (Husband to Sharesse}, Michael Warfel, and Tyler Whatley, could not have loved him more. Richard's 4 great-grandchildren brought him immense joy. Born April 14, 1938, in Philadelphia, PA he was the son of Richard and Gertrude Holgate who preceded him in death. He was the brother of Barbara Joan (Joseph} Abrams and Andrea (Dick} Saylor and is also survived by several nieces and nephews.

Richard graduated from Frankford HS, class of 1956 - attended The University of Pennsylvania, Wharton School, and enlisted in the Army (volunteered for the draft} in 1957 and was honorably discharged in 1963.

He married the love of his life and best friend Ellen Marie Price on January 27th, 1962.

He worked his entire life wanting only to take care of his family spending 35 years working at PECO retiring in Senior Management. He then spent 10 years as Superintendent of the Water Department In Lancaster, PA. In 2000, Richard and his wife moved to Florida where he enjoyed serving on several Boards, golfing on the golf course where his home sits, playing poker, never missing a day at the gym, or his Thursday afternoons spent with his dear friend Carl Roccia, where they would have their

"cocktails and cigars" and "solve the world's problems".

Richard's life and memory will be cherished by all the lives he touched. In parting, or ending a conversation, he would say "Bye for now". Though we won't hear this any longer we want to say

A Funeral Mass will be celebrated at St. Anne Catholic Church, Ruskin, on Friday, November 19th at 10:00 AM. Interment to be held privately.

In lieu of flowers, donations can be made to Chapters Health System (Life Path Hospice) at www.chaptershealth.org.

To send flowers to the family or plant a tree in memory of Richard Holgate , please visit Tribute Store