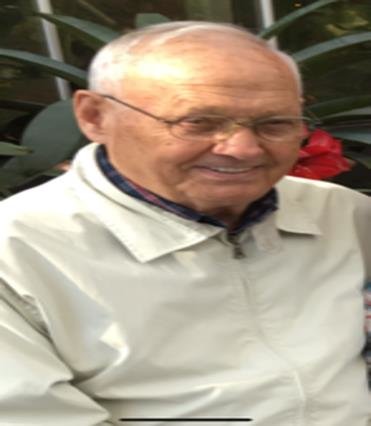 Franklin “Frank” Hughes, loving husband, and father of three passed away on Sunday, January 24, 2021, at the age of 86.  He was one of 9 children born to the late William and Iva (Harrod) Hughes in Frankfort, Kentucky.  He served in the United States Air Force and then attended the University of Kentucky where he obtained a Bachelor of Accounting.  He was a certified public accountant and business entrepreneur in Portsmouth, Ohio. He married Nancy Louise McLin on April 16, 1960 and they had three children. During retirement, Frank took up farming as a hobby in Somerset, KY. Frank was an avid bridge player, stock trader, and UK Basketball fan. Frank was known for his generous spirit and hardworking nature. He is survived by his children:  Sandy Hughes Russell (Randy); Jo Ann Hughes Konenkamp (Mark); and Frank Hughes, Jr. (Kim); and seven grandchildren, Katherine Konenkamp, Matt Russell, Eric Russell (Hilary), Drew Konenkamp, Sarah Hughes, William Hughes, and Joseph Hughes.  He is also survived by his sister Irene (Stewart) and brothers; Mason (Betty) Hughes and Jerry Hughes.  Frank was preceded in death by his wife Nancy Louise McLin Hughes and his siblings; William Wade, James Wylie, twin sister Leona, and Mary Charleston “Charlie.”  Due to COVID-19 restrictions, a graveside funeral service will be held for immediate family at Arlington Cemetery in Atlanta, Georgia.

To send flowers to the family or plant a tree in memory of Franklin Hughes, please visit Tribute Store

Share Your Memory of
Franklin
Upload Your Memory View All Memories
Be the first to upload a memory!
Share A Memory
Send Flowers