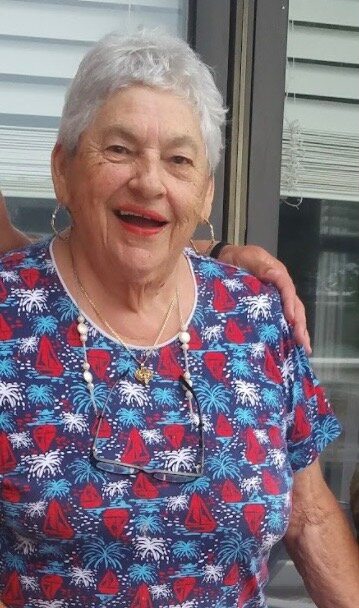 Germaine Frances Piazza Carney died peacefully on October, 30, 2022, in her home, in Apollo Beach, Florida, surrounded by her loving family.  Mrs. Carney was well known and loved by many in the Apollo Beach and West Columbia , SC communities.

She was born July 14, 1930 to Annie and Vincenzo Piazza in Abbeville, Louisiana, Vermilion Parish.   After graduation from Texas State College for Women, she was married in Abbeville in 1956.  She was active in Saint Mary’s Parish in Jackson, Tennessee, and Saint Peter’s Church in Columbia, South Carolina.  In 2010 Mrs. Carney retired with her husband to Apollo Beach, Florida, where they attended Saint Anne’s Catholic Church.

Mrs. Carney earned a Master’s Degree from the University of South Carolina while working and being a full-time mom.  She took great pride in preparing meals for her family and sharing the Italian culture and recipes that best express her heritage.  She will be remembered for the food culture she celebrated with such great enthusiasm.  Famous for her Cajun and Italian cuisine,  she could prepare anything that came out of the water and always had a spaghetti sauce simmering.  She was proud to return to her hometown of Abbeville and to attend this year’s Sicilian Festival where she reconnected with friends and with family as the Matriarch.

Mrs. Carney was a memorable staff member of Brookland Cayce High school in Cayce, SC for her no-nonsense approach to study hall and in-school suspension.   Her straightforward,  honest, and colorful comments endeared her to all who know her.  After retirement, remembrances and anecdotal stories from former students were a great source of joy for Mrs. Carney.

She traveled extensively with her husband during their fifty-three years together, visiting far-flung places and being visited by family and friends.

Mrs. Carney was happy to be able to return to her home during her final weeks, and was lovingly cared for by her daughter, Caroline, with the capable assistance of Life Path Hospice. Special thanks for their help during Mama’s illness.

Funeral Mass will be celebrated at Saint Anne’s Church, Apollo Beach, Florida on Thursday, November 3rd @ Noon followed by a gathering of friends and family at the Ruskin Woman’s Club.

“Motherhood is a million little moments that God weaves together with grace, redemption, laughter, tears, and most of all, love.”

To send flowers to the family or plant a tree in memory of Germaine Carney, please visit Tribute Store
Thursday
3
November

Share Your Memory of
Germaine
Upload Your Memory View All Memories
Be the first to upload a memory!
Share A Memory
Send Flowers