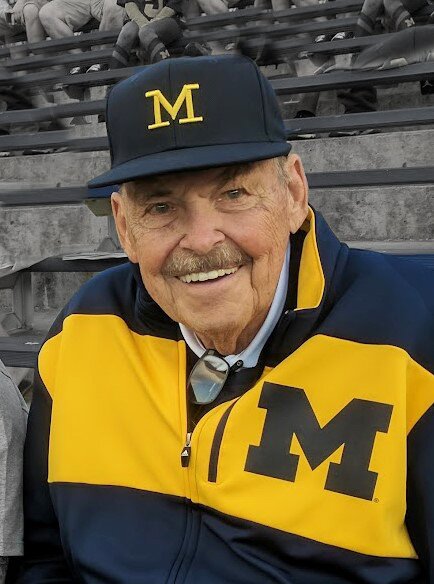 As the clock struck midnight at the end of October 13, 2022, the world lost a bit of its charm.  For the first time in almost 91 years, the terrestrial world turned on its axis without John Brannock as a passenger.  John passed away peacefully at his home in Sun City Florida, kindly waiting for his sons, Steven, Mark, and Robert to gather and share his departure to the next world.

John Gentry Brannock was born in Benton Harbor, Michigan on January 27, 1932, the proud baby boy of Samuel Lee Brannock of Galax Virginia and Margaret Augusta Gentry (Gussie)  Brannock of Mount Airy, North Carolina.  He was the baby of the family, the last of four children of Lee and Gussie.  His older brother, Lee, became his mentor and his older sister, Sarah (Sally), his caretaker and best friend as Gussie fell into ill health.

John loved and excelled at sports of all kinds.  He played track, tennis, and football at Benton Harbor High School, a proud graduate of the class of 1950.  He went on to Hope College in Holland Michigan on a basketball scholarship.  He had the sweetest jump shot and with it helped guide Hope to a national ranking as a junior and senior.  After graduating with a degree in Education from Hope in 1954, he entered the army and spent a year stationed in Germany, touring with the army basketball team all over Europe, playing all comers, including the Harlem Globetrotters.  Later in life he honed his tennis and golf skills and shot his age dozens of times on various golf courses around Florida and Massachusetts.  John’s golf game was the envy of his friends well into his late eighties.  None of his boys could ever match him at either tennis or golf, although they sure gave it their best shot.

John married his childhood sweetheart, Jane Ann Talbot on June 19, 1954 in Benton Harbor.  Five boys soon followed, Steven, David, Mark, Michael, and Robert.  None could top his athletic ability, but all shared his love of sports.  Two of his happiest moments were sharing the Masters Tournament with his sons for his eightieth birthday and a Michigan/Michigan State matchup at the big house in Ann Arbor for his eighty-fifth.  Even a huge rainstorm and a Michigan loss could not dampen the spirit of the occasion.

John’s first loves were teaching and coaching.  He taught history at Benton Harbor High School and coached the junior varsity football team to two straight undefeated seasons.  He also coached the tennis team and helped the basketball team which included his star prospect, Chet Walker, who went on to a Hall of Fame NBA career with the Philadelphia Seventy-Sixers.  Long after he left teaching and coaching, John enjoyed nothing more than getting together for a reunion with his former students and athletes.  He took considerable pride in watching them grow and succeed.

He then brought his outgoing personality to the business world, selling insurance and real estate for many years.  A supremely talented salesman, he spent years traveling the country conducting seminars on the art of selling.  He had a reputation as a talented expert and lecturer and his classes were always in demand.  Perhaps his most interesting turn as a salesman was when he became part owner of the Spinal Column, a weekly newspaper in the suburbs of Detroit.  He learned the newspaper business and sold the ads that kept it alive.

During his early career, John lived in Benton Harbor and then Farmington Michigan.  Florida then beckoned and, from 1971 forward, he spent many years in Miami and Fort Lauderdale.  Always looking for something new, he moved to the Berkshires of Massachusetts, where he spent several wonderful years selling commercial and residential real estate and loving the history and beautiful surroundings of New England.  When the winters became too much, he retired to Sun City Center Florida in 2010, where he continued to sell real estate and beat his friends on the golf course for many years.

In Sun City he met his late in life companion, Dindy Chandler.  Dindy brightened his final years as they wined and dined and traveled the world together.  John was a lucky man; no one could have had a better friend and companion than Dindy.

The world’s loss is heaven’s gain.  That sound you hear in the distance is likely John playing the ukulele and singing his favorite tunes with his son David.  No one sang “King of the Road” better.  John never met a person he couldn’t befriend, and he is doubtless charming all of heaven’s recent arrivals.  By now he will have taken Queen Elizabeth for a spin or two around the dance floor.  In between numbers, he will likely be seen talking country music with Loretta Lynn and giving acting advice to Angela Lansbury.  By now, he knows all the ropes and is easing all the new arrivals into their new surroundings.

Details of a gathering in celebration of John’s life will be announced soon.

To send flowers to the family or plant a tree in memory of John Brannock, please visit Tribute Store