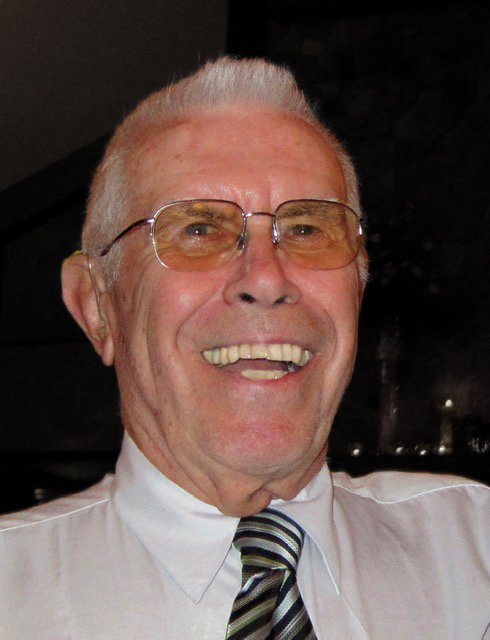 Fred Lee Davis Jr. of Sun City Center, Florida passed away peacefully at the age of 90 on February 17, 2021. Fred was born October 3rd, 1930 in Detroit, Michigan. He grew up on the west side of Detroit, raised a family in Livonia and later moved to Tennessee and South Florida.

Fred is survived by his beloved wife Thelma, his children (Kathy Teel, Bob Davis and Jane Hund), step-children (Terri Tutor, Cheryl Brautigan and Lori Weese), 9 grandchildren and 6 great-grandchildren. Fred was preceded in death by his sister Jean Hosman in 1985.

Fred spent 8 years in the US Naval Reserve. After graduating from Michigan State, he was a stock broker and principal at the firm of Davis, Rowady and Nichols. He finished his career at First of Michigan in 1995.

Fred’s favorite saying was “Life is Good” and his optimism was contagious. He made friends wherever he went. Fred was known for his one-liners that no one will ever forget.

Fred continued the family heritage of a love for the water and boats. His boating adventures included sailing extensively around the Great Lakes and trips from Detroit to Florida and the Bahamas and back. Later he joined the Coast Guard Auxiliary, rising to the rank of Commodore of the 9th Central District.

Fred and Thelma enjoyed traveling and were always up for a challenge and looking for their next adventure. Not surprisingly, many of their trips were on cruise liners that took them across the Atlantic and Pacific Oceans. They also traveled throughout America and Europe.

There will be a memorial service later this year.

To send flowers to the family or plant a tree in memory of Fred Davis Jr., please visit Tribute Store

Share Your Memory of
Fred
Upload Your Memory View All Memories
Be the first to upload a memory!
Share A Memory
Send Flowers