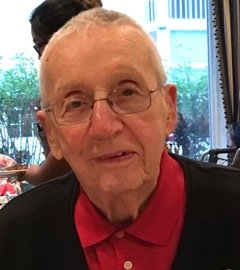 Born March 8, 1931 to Albertine and Edward Fortier in New Britain, CT.  Graduate of New Britain High School and the University of Hartford. Veteran of the Korean War, having served four years in the U.S. Air Force, mostly in occupied Japan.  Bob retired as a senior executive of First National Stores after a loyal 43 years with the company. Before relocating to Sun City Center, FL, in 2002, Bob was an active member of Kensington Congregational Church in Kensington, CT.

In Sun City Center, he was  a member of Caloosa Golf and Country Club and the Men’s Club, and active in the United Community Church. Bob’s generosity, sense of humor,  and outgoing personality made him a center of gravity among his family and friends, and he will be missed by all, both near and far.

To honor his memory,  the family suggests you do an act of kindness for someone in need, or make a donation to The Salvation Army, United Community Church or Kensington Congregational Church.

Due to the pandemic, services will take place at a future date.

To send flowers to the family or plant a tree in memory of Robert Fortier, please visit Tribute Store