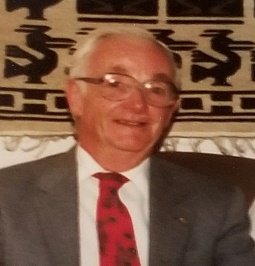 Archer Corbin Bush, Jr., 96, died peacefully February 29, 2020 at Hospice House, Sun City Center, FL.  He is predeceased by his loving wife of 66 years, Jessie Bush.  He is survived by his children, Steven (Sharyn) Bush of St. Augustine and Anne (Wally) Gehlsen of Tarpon Springs, as well as three grandchildren, Jessica Bush of St. Augustine, Kimberly Bush of Jacksonville, and Jacob Gehlsen of Tarpon Springs, and great-granddaughter, “Millie,” of St. Augustine.  Loving memories of Arch remain with his nieces and nephews, and his many friends

Archer was born in Montclair, New Jersey on June 20, 1923.  He volunteered for service in the U.S. Navy in 1943, where he served as a Hospital Apprentice Second Class in the Navy’s Hospital Corps.  He served aboard a flat-bottomed LST, the USS LST 59, which played an important role in the Normandy invasion on June 6, 1944.  He did not consider his service a sacrifice, rather a time of immeasurable benefits.    With the GI Bill largely financing his college education, Arch attended Colgate University, where he earned his BA and MA degrees.

In 1951, Arch joined the newly formed Central Intelligence Agency (CIA) in the Office of Current Intelligence, which was responsible for analyzing foreign information and preparing reports for distribution to U.S. Government policymakers.  This included the President’s Daily Brief (PDB), which was prepared especially for the President.  Arch remained at the CIA for nearly 30 years, serving under the administrations of Harry Truman through Jimmy Carter.

On October 31, 1953, Arch and Jessie were married and settled in Washington, D.C. in a bungalow-type house on Potomac Avenue, high above Chain Bridge and the Chesapeake and Ohio Canal.  Steven and Anne were born in 1959 and 1961, respectively, growing up in this lovely home and vibrant city.

After their children moved away and Arch retired, Jessie and Arch moved to North Carolina’s Outer Banks, where they built a beautiful home designed by Jessie.  In 1989, the couple moved to Winston-Salem, NC, where they lived for 13 happy years.  In 2002, they moved to Sun City Center to be closer to their children.

Archer was a hard-working family man.  He made strategic career decisions which enabled him to avoid extended travel for his job, thus allowing him to be there for his family as much as possible.  He put the needs of others before his own throughout his life.  A giving, loving, and selfless man, he had an astounding memory and frequently shared memories of his life with family and friends.

As a World War II veteran, a highlight of Arch’s later years was his participation in the Honor Flight in 2014.  With his son, Steven, accompanying him, Arch joined other veterans on this flight to Washington D.C. to visit the memorials dedicated to honoring their service and sacrifice.  Upon their return, the veterans were enthusiastically greeted by hundreds of family members, friends, and grateful citizens.

A celebration of Arch’s life is scheduled at a later date.

To send flowers to the family or plant a tree in memory of Archer Bush, Jr., please visit Tribute Store

Share Your Memory of
Archer
Upload Your Memory View All Memories
Be the first to upload a memory!
Share A Memory
Send Flowers