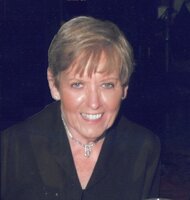 Theresa (Terri) Flores of Sun City Center Florida passed away peacefully on July 20th 2022 after a very long battle with dementia. She was surrounded by her loved ones and caregivers until her journey was complete.

Terri was born January 10, 1937 in Wilmington, DE and later raised her family in Atlanta, GA.   Terri retired from the Ronald McDonald House in Atlanta, Ga and moved to Sun City Center in 2001. She was a member of Prince of Peace Catholic Church. Terri dedicated her retirement years to volunteering roles and serving the church. Her passion was being able to minister Holy Communion to the sick and homebound.

Terri was preceded in death by her loving husband Joseph L Flores (2019). She is survived by two adult children Elizabeth and Mark as well as three grandchildren. Allison, Clay and Jordan.

Terri’s family would like to express their most sincere thank you to the many nurses and caregivers at Aston Gardens Courtyard. Their compassion for Terri and for their family support over the last two and a half years has been unwavering. While there are too many to name, the family in particular would like to specifically thank Candise Brown who treated Terri like her own mother and Terri’s family as her own.

Visitation will be 10-11 AM July 26th, 2022, at Prince of Peace Catholic Church followed by a funeral mass at 11 AM. Terri will be laid to rest at Sarasota National Cemetery with her soulmate and husband Joseph at a future date.

In lieu of flowers, Terri would want her passion to minister to the sick and aging to continue. Please donate an hour of your time to helping a shut in or a family learning to deal with dementia or Alzheimer’s Disease. Donations can also be made in Terri’s name to Lifepath Hospice at www.chaptershealth.org or the Dementia Society of America at www.dementiasociety.org.

One of the many lessons Terri’s family learned during this difficult time was this was her journey and to follow her, don’t try to change her.