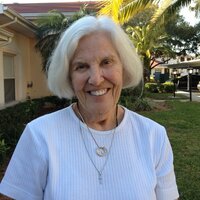 ELINOR SCHNEIDER CURRIE was born on May 5, 1933 in Massillon, Ohio, the third surviving child of Orlando and Odessa Schneider.  Raised in Canton, Ohio, she graduated from Lincoln High School in 1951 and from Mount Union College in 1955.  There she met her husband-to-be Philip Currie, whom she married in 1956.  After teaching school in Millersburg, Ohio and Lima, Pennsylvania, she welcomed her first-born, David, in 1959.  A daughter, Jill, was added to the family in 1962.  In 1964, she moved with her family to Latrobe, PA, where her husband practiced medicine for thirty years as an obstetrician-gynecologist.  In addition to her primary vocation as a homemaker, she served as a volunteer at the Latrobe Area Hospital, particularly through her role as a clown who helped demonstrate basic medical procedures to children to reduce their anxiety.  In the mid-1990s, she began spending the winters in Sun City Center, FL, eventually settling there year-round in 2010 until her death on June 21, 2022.

A life-long lover of the arts, she was active in local drama and musical groups, serving on the board of directors of the Westmoreland Symphony. She continued singing in church choirs until the Sunday before dying unexpectedly in her sleep.

Raised in a believing family, she sought to nurture her own family in faith, becoming a member and eventually a deacon at the Latrobe Presbyterian Church, transferring to the Sun City Center United Methodist Church after moving to Florida.  Through her years in FL, in addition to her ministry through the SCCUMC Chancel Choir, she served for many years as part of the Non-Denominational Christian Worship Service team, leading singing at independent, assisted living and memory care facilities in the area.  She also sought to live out her faith in quiet support of a variety of ministries such as My Warrior’s Place and Leadership Transformations, as well as African Enterprise, including participating in an overseas mission trip to Southern Africa.

A Memorial Service will be held at Sun City Center United Methodist Church (1210 W. Del Webb Blvd, Sun City Center, FL 33573) on Friday, July 1, 2022 at 11:00 AM, followed by a reception at the church.  In lieu of flowers, donations may be made to My Warrior’s Place:  https://www.mywarriorsplace.org/

Her ashes will be interred next to her husband’s at Unity Cemetery in Unity Township, PA, later in the year in a private, family service.