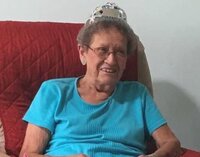 Sarah B Herbert, affectionately called Sally by friends and family passed away Friday, April 29 at the age of 88. Sally was a resident of Sun City Center. She was preceded in death by her husband of 64 years, Murl, as well as her 3 brothers and 1 sister. Sally is survived by her five children, Tom Herbert, Debbie Masters, Greg Herbert, Julie Herbert and Joyce Sharp. She has 9 Grandchildren, Holly, Curtis, Lindsey, Mathew, Geoffrey, Kristen, Travis, Sidnie and Gerard. She is also blessed with 12 Great Grandchildren. Sally and Murl were honored to be in the square dance hall of fame. She was also an avid bridge player. She loved to play cards and board games. Sally also enjoyed crafting. Her greatest accomplishment was raising her family. She was a loving mother and Grandmother. She is the glue that holds it all together. She will be greatly missed and always in our hearts. A celebration of Sally’s life will be held at 12:pm on Thursday May 12 at Sun City Center Funeral Home,1851 Rickenbacker Drive, Sun City Center FL. In lieu of flowers the family suggests a donation in Sally’s name to Lifepath Hospice 3723 Upper Creek Dr., Sun City Center FL 33573