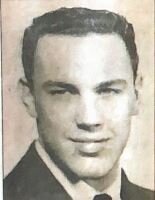 He was born in Frederickstown, on August 29, 1942, and was the son of the late Ed and Midge Croft Lawrence.

He was a graduate of Beth-Center Senior High School, Class of 1961.

Mr. Lawrence moved to Washington, DC area in 1962. He served in the National Guard in Washinton DC for six years.

He started his banking career at American Security and Trust.  He retired after over 30 years as a Senior Vice President with Maryland State Savings and Loan (Now BB&T).

He loved spending time with his grandchildren and enjoyed watching football, baseball, and basketball.  William will always be remembered as a kind, generous loving man.  He is missed.

In lieu of flowers, memorials may be made to the American Heart Association.