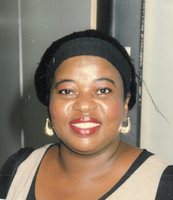 Carnetta Roselda Simmons (Joseph) of Gibsonton, Florida, passed away on December 28, 2019.  She was 62 years old.

The daughter of Emmanuel and Diana Simmons.  Carnetta was born on March 16, 1957, in Cat Island, Bahamas.  She was the youngest of seven children.

At a young age she moved to Nassau, Bahamas and attended Seventh Junior Primary School, and later Eastern Senior High, where she graduated with honors.

Several years later, Carnetta migrated to Miami, Florida.  She met Patrick Smith and they were married on June 4, 1984.  The union produced a son, Abijah Smith.

Carnetta attended The Miami Lakes Technical College in 1986, where she completed her studies in 1987, and obtained her LPN license (Licensed Practical Nurse).

Carnetta worked as an LPN for several years then tried to pursue a Bachelor’s Degree in Education, but was unable to finish because she became ill.

Carnetta is survived by her husband, Reginald “Vibra” Joseph; her son, Abijah Smith, her sisters; Earlene Simmons, Bulah Rutherford, Coralie Sawyer, Ellamae Simmons, and many nieces and nephews too numerous to mention.

She was preceded in death by her parents, Emmanuel and Diana Simmons; her sisters, Edna Hart, Esther silver; her brothers, Eric Simmons and Aaron Simmons.

May the soul of the departed Carnetta Roselda Simmons, rest in peace and rise in glory.